What is hepatitis E?

Hepatitis E produces inflammation of the liver, which is caused by infection with the Hepatitis E Virus (HEV). Hepatitis E can cause an acute and self-limiting infection and occasionally develops into acute, severe liver disease, which is fatal in about 2% of cases. HEV is widespread in Southeast Asia, Northern and Central Africa, India and Central America. The incubation period of HEV following exposure is approximately 3-8 weeks.

Why is Hepatitis E an issue?

HEV is an important, yet extremely under-studied pathogen. In recent years, there has been a rise in the number of non-travel related infections in the UK. Public Health England reported that numbers of confirmed hepatitis E cases and infections increased significantly between 2010 and 2016. Infection is usually spread in one of three ways: by direct contact with infected animals, by consumption of contaminated food or water, or via an infected blood donor (less common). The human infectious dose is currently unknown.

What food is considered at risk?

Even though HEV is suspected to be primarily associated with pig liver products, new data suggests that almost all food categories can pose a risk of infection. The main source of HEV contamination is game meat and pork-associated products. Studies have shown that ready to eat vegetables (1) and bivalve molluscs (2) may also pose a risk of transmitting the virus.

How common is HEV in British pork?

Evidence indicates that HEV is widespread in the domestic pig population, and the virus has previously been detected in pork products. A study found that 92% of pigs in the UK were seropositive at the time of slaughter. Twenty one percent of these pigs were also RNA positive, indicating that the infection was recent and that the virus could still infect consumers (2). A study by DEFRA in 2012 reported that 10% of pork sausages purchased from UK retailers contained detectable HEV at the point of sale. However, it was noted that most of the samples were from the same batch and did not represent the situation across the UK.

How can you control HEV?

One of the routes of HEV infection in pig herds is through feed and water supplies that have been contaminated with faeces from infected pigs. The majority of pigs get infected relatively early, which gives enough time for the infection to clear out of their system and not pose a further threat for human health. However, the individual pigs that are infectious at the time of slaughter could pose a risk through direct consumption as well as through cross contamination in the slaughterhouse. The handling of infected meat in butcheries and the use of meat from multiple sources in processed pork products are also contributing factors. There are no widely available cures for human HEV infection. A registered human vaccine is available in China, but this has not yet been approved in other countries. The body’s immune response is currently the only other way to tackle the virus. Studies are also under way to investigate potential swine vaccines for controlling HEV infection in the herd and to reduce the potential for food contamination.

There is very limited information on the effectiveness of cleaning in food factories for HEV decontamination. Currently available studies agree that the food matrix provides a protective environment for the survival of the virus. The use of chlorine disinfection as an effective strategy to control HEV in water has been investigated with several authors reporting an average 2 log reductions, but this can be affected by organic load, temperature and water pH (3) (4) (5). When it comes to heat treatment of products, current data suggests HEV could survive heating to 71oC for at least 5 minutes but not 20 minutes in contaminated liver (4). However, further studies need to be carried out to thoroughly define the heat resistance profile.

Cooking is an important control for eliminating any pathogen from raw food products, but some viruses appear to be relatively heat stable and difficult to inactivate. The effect of heat on HEV during domestic cooking and manufacturing processes has not been fully investigated. When it comes to plant products, a washing step is essential. Bivalve molluscs and pork meat products should not be consumed raw or lightly cooked. Following the FSA advice from May 2017, "whole cuts of pork, pork products and offal should be thoroughly cooked until steaming hot throughout, the meat is no longer pink and juices run clear."

What is the current scientific situation?

At the time of writing, there is no standardised method for the detection or quantification of HEV and no infectivity assay suitable for routine analysis of foods which may be contaminated with HEV. Several molecular methods can be adapted for the detection of the virus. Further research is needed to develop cell culture methods for testing infectivity. An ISO working group is being set up to address the development of a standard for HEV detection.

How can we help?

Campden BRI can offer practical advice on how to detect and minimise the risk of viral contamination. Our member funded research project has provided data which can help the food industry consider effective virus control measures. We are also in the process of introducing an in-house protocol for detection of HEV in pork and pork products. To find out more about how we can help, please get in touch. 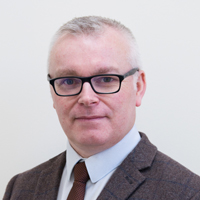 Martin D'Agostino joined Campden BRI in 2016 as a food virologist after having worked at the Food and Environment Research Agency (DEFRA) since 1994.

This video shows you how to take a clinical swab test to detect if you have COVID-19.

This video demonstrates how to take an environmental swab on frequently touched surfaces to detect the virus that causes COVID-19.

How did COVID-19 cause food poisoning cases to plummet?

As we pass the one-year point in the pandemic, COVID-19 has appeared to have had a drastic effect on reported cases and outbreaks of food poisoning.

This webinar will explain how Campden BRI can help you test for the presence of COVID-19, risk assess your factory hygiene and keep your site COVID secure.