Farewell and thank you Steven 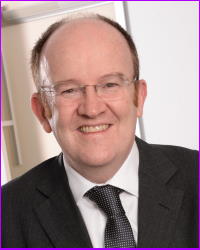 Our Chief Executive, Steven Walker, has announced that he is stepping down and will leave Campden BRI at the end of the year, after 33 years with the business.

Steven joined the then Campden Food Preservation Research Association in 1986, following his PhD in food microbiology. He very quickly established himself as the ‘go to’ person for all matters relating to Listeria and the microbiology of chilled foods. He was a leading light in the development of predictive microbiology, as a prominent member of a large industry-government consortium.

He became our first research manager in 1994 and Director of Research in 1996. Leading the research across the business he laid the foundations that, to this day, provide such strong member engagement in our R&D activities based on industry’s scientific and technical needs. Following further director roles, in 2009 he became Director General and subsequently CEO.

Steven commented "When we moved to England, I suggested to my wife that it would be for two years. But 33 years later I can reflect how I had the opportunity to develop my career through a range of roles, thoroughly enjoying working with colleagues in over 20 countries around the world. Campden BRI has a worldwide reputation as a centre of expertise and I am very proud to have been part of this."

Steven’s readiness to share his expertise and wisdom has been greatly appreciated by both colleagues and clients and has played a significant part in the development of many individuals within the company and industry at large.

He will be succeeded by Chris Huscroft, our Chief Operations Officer.

Enzymes are naturally occurring materials in plants and animals and are widely used in the manufacture of bakery and other products that make use of modern food processing plants.

What causes bread dough to rise?

A great deal is written about the way that yeast produces carbon dioxide to leaven bread dough during proof. However, there are other gases such as ethanol and steam that are vital during the oven stages of bread making.

Decontaminating with UV-C light? Here’s what you need to know

As businesses look for new ways to combat the virus that causes COVID-19, the application of ultraviolet light has seen an incredible uptake.

Bread is one of Britain’s most wasted foods, around 24 million slices of bread are thrown out by UK households every day.