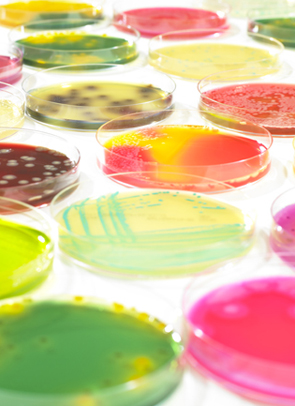 Understanding how bacteria come back from the dead

Salmonella remains a serious cause of food poisoning in the UK and throughout the EU, in part due to its ability to thrive and quickly adapt to the different environments in which it can grow. New research involving a team of IFR scientists, funded by BBSRC, has taken the first detailed look at what Salmonella does when it enters a new environment, which could provide clues to finding new ways of reducing transmission through the food chain and preventing human illness.

Bacteria can multiply rapidly, potentially doubling every 20 minutes in ideal conditions. However, this exponential growth phase is preceded by a period known as lag phase, where no increase in cell number is seen. Lag phase was first described in the 19th Century, and was assumed to be needed by bacteria to prepare to exploit new environmental conditions. Beyond this, surprisingly little was known about lag phase, other than bacteria are metabolically active in this period. But exactly what are bacteria doing physiologically during this period?

To fill in this knowledge gap researchers at IFR, along with colleagues at Campden BRI, a membership-based organisation carrying out research and development for the food and drinks industry, have developed a simple and robust system for studying the biology of Salmonella during lag phase. In this system, lag phase lasts about two hours, but the cells sense their new environment remarkably quickly, and within four minutes switch on a specific set of genes, including some that control the uptake of specific nutrients.

For example, one nutrient accumulated is phosphate which is needed for many cellular processes, and a gene encoding a phosphate transporter was the most upregulated gene during the first four minutes of lag phase. The cellular uptake mechanisms for iron were also activated during lag phase, and are needed for key aspects of bacterial metabolism. This increase in iron leads to a short term sensitivity to oxidative damage. Manganese and calcium are also accumulated in lag phase, but are lost from the cell during exponential growth.

This new understanding of Salmonella metabolism during lag phase show how rapidly Salmonella senses favourable conditions and builds up the materials needed for growth. This study was carried out by two BBSRC-CASE studentships, which were partially funded by Campden BRI.

Future research to work out the regulatory mechanisms behind these processes and the switch from lag phase to exponential growth will tell us more about how Salmonella can flourish in different environments, and could point to new ways of controlling its transmission in the food chain.


Reproduced courtesy of IFR – the original document can be accessed here.